Horror From the Crypt of Jean-Luc Godard 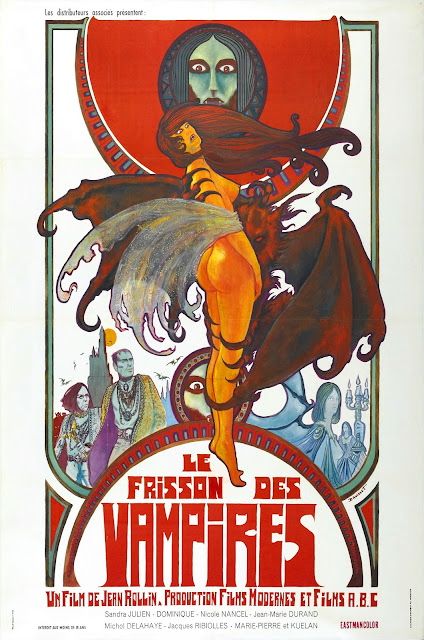 Weird title, huh? It’s also totally bogus but in a sense it does kinda fit as the description of the film I watched last night, 1971’s “Le Frisson des Vampires” (The Shivers of the Vampires). 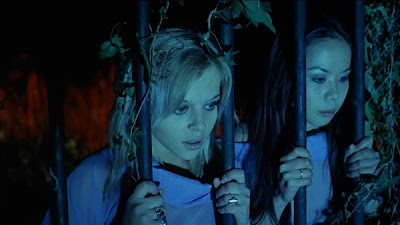 The plot is reasonable straightforward. A French newlywed couple stops at the bride’s cousin’s castle on their way to a honeymoon in Italy. She hasn’t seen them since she was a child but has fond memories of staying there as a little girl. Upon arrival she’s informed that her cousins had died just the day before. The couple still stays there but the bride is too upset to consummate the union on her wedding night. She asks her new husband if she can sleep alone and he acquiesces. That night she is visited by a strange woman whom she is unnaturally drawn to. Then the next day her cousins appear, seemingly alive and well. Before too long the horrible reality becomes apparent, that the castle is inhabited by vampires and that they intend to make the young wife one of the undead. 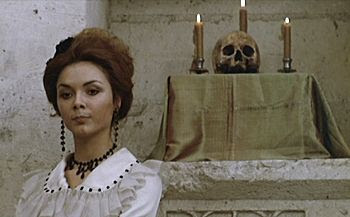 Okay, that set up sounds like pretty standard vampire fare but what complicates it is that director shoots it as if he were making a French New Wave film. The characters don’t so much speak as people but instead go off on philosophical tirades about ancient religions and the merits of free roaming vampires versus bourgeois ones. More often than not simple questions are answered with obtuse replies. Despite its intentions, it comes off more like a parody of that style than as a sincere effort. 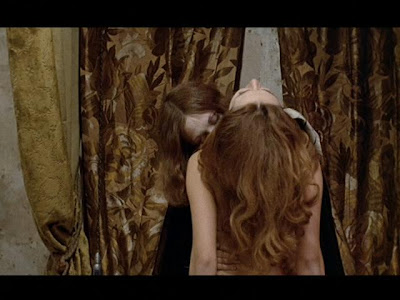 That failing though it countered by the extraordinary visuals. If nothing else director Jean Rollin knew how to compose and shoot beautiful shots. You could almost take individual frames of the movie and use them in a book of photographs. The use of color is also very striking. Occasionally Rollin seemed to be clever for clever’s sake like a shot that pans 360 degrees for no real dramatic reason. More often though he uses simple tricks that come off very effectively, such as when the husband is attacked by (of all things) a library. Then there’s a sequence of a crypt opening that’s done with a herky-jerky stop motion animation technique, that I believe was a tribute to F. W. Murnau’s “Nosferatu”. 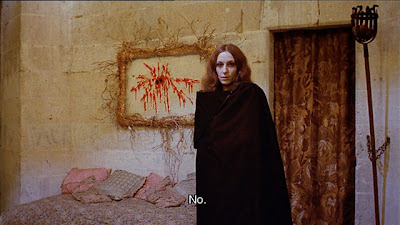 Although it’s one of the more unconventional entries in the Vampire genre, I was glad to have caught this.