Frozen Dead...That's What I Said 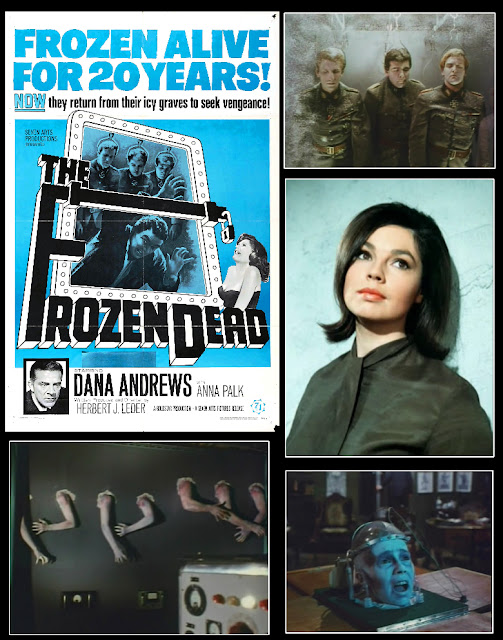 I've always enjoyed the mad-scientist/reanimated/decapitated head movies. From the Brain That Wouldn't Die, The Head, Beast of Blood all the way through Re-Animator I love them all. I still remember as a child seeing the floating disembodied head of the local Nightmare Theater horror show on television by accident. That 30 second clip had me running out of the living room in fear. From that point on I forbade my parents from watching channel 10 when I was around. Now of course I would kill to see a video of that long lost promo which was probably never saved on videotape.

One of the creepier films in the this genre is “The Frozen Dead”. An early entry into the Nazisplotation genre along with She Demons, The Flesh Eaters, Flesh Feast and They Saved Hitlers Brain. This story concerns a german scientist Dr. Norberg played by Dana Andrews who now resides in England. He is trying to revive some frozen Nazi elite in order to attempt to help create a new Fourth Reich. 7 soldiers have been thawed-out but they seem to be mentally defective. They wake from their suspended animation focused on a single memory. If the experiments were successful though 1,500 more loyal Nazi's would be thawed out as well.

After many experiments Dr. Norberg is weary of all his failures. His assistant Karl though has been lying to the Neo-Nazi big shots and has been claiming Dr, Norberg is successful in his experiments. The Nazi bosses show up at his mansion for an impromptu demonstration the experiments. At the same time Norberg's niece Jean shows up with her friend Elsa, from America, not knowing about whats going on with her uncle.

Unfortunately for Elsa she becomes a victim of Karl's deviousness when he strangles her but blames it on prisoner #3 (Edward Fox). This gives Norberg a human head in order to proceed with his ghoulish brain experiments.

Elsa's decapitated head is placed in box and revived with oxygen tubes and nutrients quite like The Brain That Wouldn't Die. The top of Elsa's head is removed as well and she has turned a not quite flattering blue color! Kathleen Breck plays Elsa and her scenes are quite nightmarish and also quite sad and touching as well. At the end of the movie all her sad creepy face can say to the camera is...bury me...bury me.

I remember watching this on a late late show in the 70's and was quite impressed by some of the weirder scenes. I believe first time we see Elsa's creepy decapitated head is when she show up in her friend Jean's dream/nightmare. This scene caught me by surprise at first viewing and is quite effective. Also quite effective are the strange distorted keyboard "sting's" that make Elsa's brief appearances much creepier. As in “The Brain That Wouldn't Die”, Elsa has telepathic powers. She can control the soldiers as well as the freaky wall of arms Dr. Norberg has in his laboratory leading to a very strange/effective/bizarre climax that rivals an old 50's horror comic book.

Dana Andrews (Dr. Norberg) made some classic movies in the 40's such as Laura and The Ox-Bow Incident. Like a lot of A-actors from the past (Broderick Crawford, Ray Milland, Caesar Romero, Barry Sullivan) he went on to make quite a few b-movies in the 60's like Hot Rods to Hell, Spy In Your Eye, The Satan Bug and Crack in the World.

Edward Fox who plays prisoner #3 went on to have a very respected acting career. Fox was also in The Loneliness Of The Long Distance Runner, Force 10 From Navarone, The Day Of The Jackal and A Bridge Too Far.

Anna Palk (Jean Norberg) was also in: Tower of Evil, The Skull, The Earth Dies Screaming and The Nightcomers. She was also in Fahrenheit 451.

Kathleen Breck (Elsa) was mostly on british television programs. The Prisoner, Danger Man, Spaceflight IC-1: An Adventure in Space and The Film West-11 are among her performances.

According to IMDB theatrical prints were in Black & White but all the TV prints I have seen are in color.

The Frozen Dead falls in the 'Creature Feature” category of movie which would probably be made as a spoof these days. These films were usually shown late Friday and Saturday nights or on Saturday afternoons as part of a Horror/Sci-fi package of films for young “Monsterkids” like me and many others to enjoy. This movie is really just as unbelievable as the George Romero “Living Dead” movies or even “The Walking Dead” one of the most popular TV shows right now, but I guess the Zombie Apocalypse trumps Frozen Dead Nazi's in these times!

A later example of Nazisploitation is 1977's Shock Waves starring the great Peter Cushing. Cushing is a Nazi scientist who had created a race of secret zombie storm troopers during WW2. Never captured they have survived somewhere off the coast of Florida. John Carradine, Brooke Adams and Luke Halpern of Flipper co-star.

Now Shock Waves did get a nice DVD release by Blue Underground in 2003 but the Frozen Dead still sits “frozen” in Warner Brother Archives movie vaults waiting to be thawed out and released in a nice professional copy.

You can see the Frozen Dead on youtube though. Check it out it's required viewing for Monsterkids of all ages.