One Order Of Tandori Dracula Please! 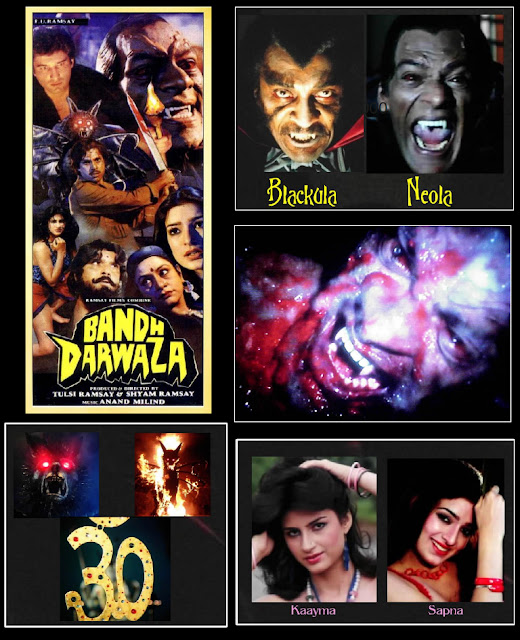 I’ll go on the record to say that when it comes to watching horror films, I’m a vampire man. The subject often combines themes of faith, carnality, elegance, and romance and can give opportunity for the tale to go in a number of different directions. In particular, I’m jazzed to see them through the eyes of cultures, which I don’t typically associate with vampires. The Korean film “Thirst” and the Swedish movie “Let The Right One In” come to mind. But I really never expected to experience such a film from India, yet I have recently done so by catching the Ramsay brothers 1990 feature “Bandh Darwaza”

While I have a fascination for Asian cinema in general the works from India are relatively underrepresented in my personal collection. Indian cinema has a number of distinct traditions that can come off as little bizarre to folks used to a strictly American diet. From the motion pictures I have viewed they use a conception of romance, which is very much in tune with the naïve 50’s era idea propagated by Hollywood. Another issue is India’s love for musicals. In their native land one or two musical numbers simply seem to be expected during the course of a film, no matter what the main subject matter might be. I think back to watching “Satya”, a rough almost Scorsese-esque gangster film that included several. Comedy is routinely inserted and mostly it is a very broad kind. Oh, and the Indians DO love to park their butts in the theater seats for large chunks of time and often the flicks clock in at 2-1/2 hours plus. All of these traits are part of
“Bandh Darwaza”

The movie opens with the longest, pre-title sequence that I’ve ever seen. I don’t doubt that it’s every bit of 20 minutes long. We see a pious, married couple that has been trying to conceive for the entire 5 years of their marriage, but to no avail. The wife, Lajo, has fears that her man might divorce her and take up with a new, more fertile mate. This angst plays into the hand of one of her servants, who is part of a satanic sect who worships a vampire. The maid promises her mistress that her dark lord has the power to make her infertile womb with child. But there will be a cost. If her offspring is a male, then she and her husband may consider it the demon’s gift with no strings attached. If on the other hand, it’s a girl child, the babe must be relinquished to the vampire’s attending coven. She agrees to the bargain and then of course gives birth to a daughter. She expected that her husband might be dissatisfied with a girl, but in fact he is overjoyed by her and filled with paternal love. Lajo goes back on her promise to the sinister enclave but before long both she and the child, Kaamya are abducted. The husband finds out where they are and goes to rescue them. He arrives too late for his wife to be sparred, but does get Kaamya and ostensibly kills Neola, the vampire, by shooting him.

After the titles are over, we are in present times, 18 years after those traumatic events. Kaamya’s father has never remarried but has nurtured her into a beautiful young woman. Kaamya has her eyes on Kumar, her father’s young factory manager and her long-time friend. But Kumar is already engaged to Sapna, the brother of his best friend and co-worker.

Sapna is away at college in Bombay, but is returning for a visit home. On the way she encounters an unusual woman who flags her down. Claiming to have had car trouble, she asks Sapna to give her a lift to an appointment which is now late for. Rather than some office or home, the odd woman has Sapna drive her to the ruins of an old temple. After the stranger leaves the car, Sapna realizes that her passenger has left a book on the seat. She goes into the temple to return it and witnesses a blood ritual where the woman has been sacrificed and where Neola is returned to life.

These events set up the issues making up the balance of the film. These are the love triangle between Kaamya, Kumar and Sapna; the reemergence of Neola and his cult and the cult’s desire to take back the child they feel was stolen from them.

The 6’7” actor Anirudh Agarwal, who specialized in playing sinister and demonic characters, imposingly portrays Neola. The Neola character uses an interpretation of the vampire mythos used that made me do a double take. All the other characters wear garb that is appropriate for the period and the locale. Yet the vampire wears the stereotypical cape and formal wear established by Lugosi’s 1931 “Dracula”. Plus the actor is a very dark skinned man and I just couldn’t help from thinking of Blacula.

There was another reading of the vampire mythology though, that I found it very satisfying. I wondered how the people in a majority non-Christian culture might be able to weld the same power that the crucifix has in Christian tradition? Initially it’s through a religious Hindu symbol, which to my culturally ignorant eyes looks a bit like the number 30. I’ve corrected my lack of knowledge and have found that is the Aum. But later on in the film, we see a crucifix and a Koran deflect the vampire as well, so it appears that any righteous emblem sickens a vampire, no matter the specific sect that it stems from. The inherent aura of goodness is enough to do the trick.

Bandh Darwaza is relatively lean on the musical numbers and they are there primarily to support the anguished romantic threads. So the pure horror buff does not have to ‘suffer’ for very long with this component.

In pure cinematic terms, Shyam and Tulsi Ramsay provide the viewer with a first rate production. In particular I’ll cite their art department for the tremendously creepy bat sculpture.

I found “Bandh Darwaza” to be a worthy addition to my library of the undead.