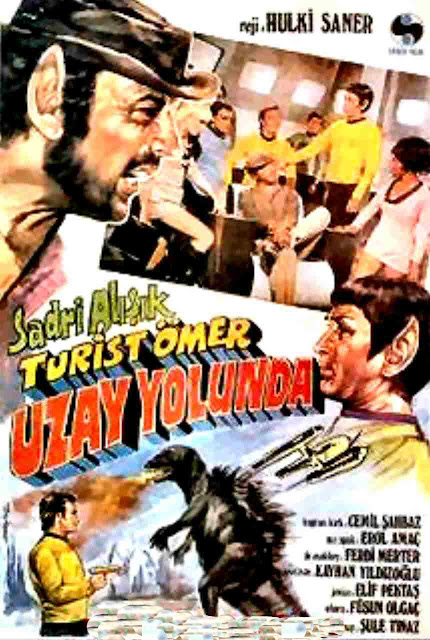 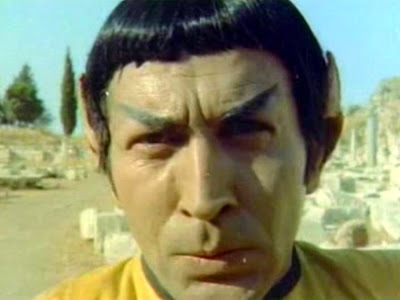 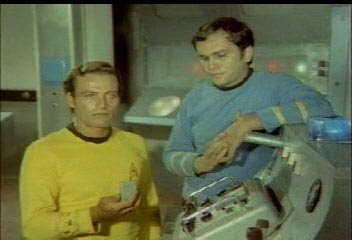 The King Of WTF

I have a behavior which actually dumbfounds my daughter. I will willingly watch foreign language films, in their native tongues and without subtitles. I see it as a kind of puzzle that I challenge myself to make sense of. I have watched pictures in Spanish, French, Hindi, Japanese and Chinese this way before. For this posting I’ll add Turkish to that select list.

The movie I watched was part of a comedy film series featuring a character called ‘Turist Omer’. He is a hobo/vagabond near-do-well that looks vaguely like the old country/western star Boxcar Willie and who acts very similar to Benny Hill. The movie I caught was a 1973 series entry called ‘Turist Omer Uzay Yolunda’. The reason I cite it as the king of WTF is that the filmmakers blended it together with he US TV series, ‘Star Trek’.

The film opens with pirated footage of the ST opening, but run through a red filter. It uses then the
official ST theme music for a bit, before cutting into a surf instrumental (the name of which escapes me). After the opening we cut to a low budget replication of the Enterprise bridge and encounter the crew. Mind you that this is not simply a pastiche of the ST crew, but in the only English in the movie the characters are called by the correct names. You have Mr. Spock, Capt. Kirk (at times Jim), Dr. McCoy, Scotty and Uhuru. The special effects are absurdly primitive. For example, to achieve the transporter effect they push the picture in and out of focus, while painting white dots on the figures. I do give the makers credit for doing a good job on the uniforms but they missed the point that color denotes rank, so Kirk and Spock both wear identical yellow garb.

The movie then charts a course riffing on two famous episodes of the series. You have ‘The Man Trap’ featuring the shape shifting alien vampire who steals salt from it’s host and briefly with ‘Amok Time’, where Spock battles Kirk in a mating ritual. As the away team investigates an issue on the surface of some planet we are introduced to a scientist with a secret agenda and he surreptitiously engages his own transporter system…

Cut to 1973 rural Turkey where Turist Omar is in a bind. We see a period automobile drive to a house and like some sort of clown-car, a large group then emerges. We see Turist, a very pregnant bride and her gaggle of gun-toting relatives. As they sit around a table, our sad-sack hero glances to the heavens praying for rescue. Suddenly he disappears into thin air, only to find himself on the planet surface, mentioned previously. Incredibly he is not thrown into a state of shock or a panic, but instead starts messing with a group of leopard skin clad robots.

The bulk of the film weaves a recreation of the aforementioned ST episodes with bouts of OT reeking mischief on the Enterprise. It seems he is compelled screw around with every button or device he sees. He is also particularly skilled at making an ass out of Spock.

The plot continues in this approach and ends in a similar manner to ‘The Man Trap’, but with a coda. Turist makes peace with his new buddies on the ship and is taken to the transporter. Seconds later he finds himself back at the wedding table, essentially at the same moment he had left. Back into the old predicament he again casts his eyes skyward, begging relief. His request is answered when he is transformed into a pointy-eared Vulcan. He escapes by using the ‘Vulcan-grip’ on the wedding party and knocking them unconscious.

If this holds your interest at all, you can sample bits of it on Youtube using ‘turkish star trek’ as your search criteria.