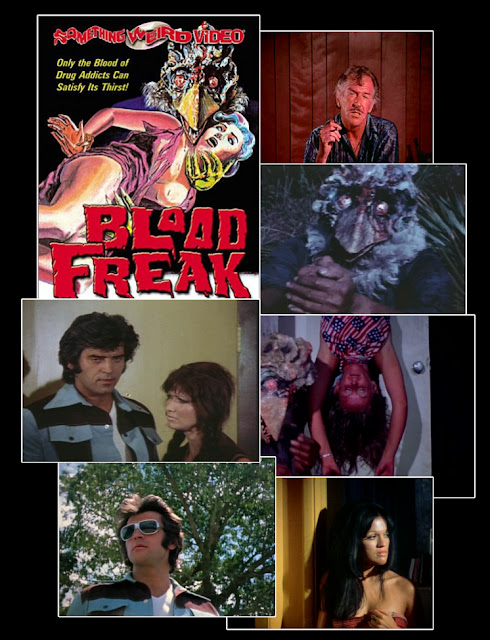 In the hierarchy of infamy for directors of bad, low-budget schlock films, Ed Wood and Herschel Gordon Lewis are surely at the pinnacle. But for my money there is another, much less known contender for the “honor”. This would be Miami writer/director, Brad F. Grinter. If it were a bad movie competition then Grinter would most certainly give Ed and Herschel a run for their money. Grinter only made a handful of films, including “Devil Rider” and “Flesh Feast”. But his Magnum Opus surely has to be 1972’s “Blood Freak”.

The film opens with a Grinter himself as a narrator sitting on a couch and spouting some quasi-philosophical banter about change and fate. Brad looks like an aging hipster, dressed very groovy but with graying temples and smoking like a chimney. It only adds to the proceedings that his phrasing and delivery is just like that of William Shatner’s. This cuts to our protagonist Hershel who is riding down Florida’s Turnpike when he spies a pretty girl having car trouble. Her name is Angel and after he helps her, the pair goes to a party. Her sister Ann is hosting, but the affair is taking place at the home the sister’s share. Angel is a Jesus Freak while Ann is a hippie, party girl who is very into the drug scene. Dope and free love are in the air, with only Angel and Hershel abstaining. More than one hot chick tries to entice Hershel but he declines. Angel then tries to inject the Bible into the proceedings, which the partygoers deem a buzz-kill. So Angel and Hershel split to go “rap” with another Christian friend of Angel’s. He owns a poultry ranch where he raises turkeys and during the rap session, Hershel confesses that he is presently unemployed. Impressed with the young man, his new friend immediately hires him for the ranch.

Meanwhile Ann is bummed out that Hershel has rebuffed her sexual advances and seeks help from her dealer, Guy. Guy gives her a powerful drug that he says will mellow Hershel out. The next day Ann again tries to seduce Hershel and once again he resists. But when she calls him out as being chicken, he agrees to try a smoke. Before very long both are high and they soon go to bed. During the evening of passion they fall in love for one another.

The next day Hershel goes out to the ranch where he will be a general hand. There are two chemists on site and they offer him a scheme to make some extra money. They have been tasked to give the turkeys drugs to enhance their size and FDA protocol demands that the meat must be tested by human consumption. Volunteering to be a test subject would mean more bread in Hershel’s pocket. He agrees to the deal and they tell him to bring his appetite the next morning.

When he gets back to the sisters home, he starts to go into violent withdrawal. The smoked narcotic that he imbibed the day before is more insidious than crack and it has hooked him from just one use. Guy is called in to give him more but when he implies that Hershel will have to start paying, he’s given a counteroffer. Keep the drugs coming and Hershel will refrain from beating the living shit out of him.

The next morning, Hershel ingests the turkey meat and by noon he is writhing on the ground in the midst of a seizure. The lab guys figure that he’ll die so they take him to a nearby field and dump him. He awakens that night but he’s changed. Returning to Ann’s house she is shocked to discover that his head has been transformed into that of a turkey’s!

Incredibly, Ann & Angel remain supportive and try to figure out ways to help him. The least of these aids is getting him the drugs he’s addicted to. What the girls haven’t found out yet though is that the transformation has unleashed a blood lust within him. At night he captures people, hangs them by their heels and then cuts their throats. Then he drinks the pooled blood.

After a series of such murders, we eventually cut to Hershel lying in the bushes appearing normal. It turns out that the turkey head sequences were all just a drug-fueled hallucination. The girls then help Hershel in getting aid for beating his addiction and the movie ends with the lovers kissing on the pier by the Newport Hotel.

Besides just the crazy-shit storyline, there are other factors that up the bizzaro ante. Hershel is played by actor Steve Hawkes and it appears that he has a serious case of Elvis worship. Steve has the general build of the King of RnR and that’s accented by Presley’s distinctive coiffure. In “Blood Freak” Hawkes seems to be playing Hershel as played by Elvis. Hawkes also comes off as an egotist. He was the co-producer of the movie, along with Grinter and the full frame “STARRING STEVE HAWKES” appears not once but twice during the opening credits.

Two sections made me believe that Grinter was either short on film or that he hated retakes. There is a sequence where Ann is talking on the phone. I assume the script must have read something like “No I must see you, I can’t talk over the phone. Come over now”. What the actress recites is “No I can’t see you over the phone. Come over now” What were there no video phones in 1972? The other is the last sequence, featuring Grinter as narrator. He’s delivering his climactic lines and he begins a coughing jag, barely getting out his lines. AND IT’S IN THE FUCKING MOVIE. Jeez, I can only wonder if he had actually puked, if he’d have used that too.