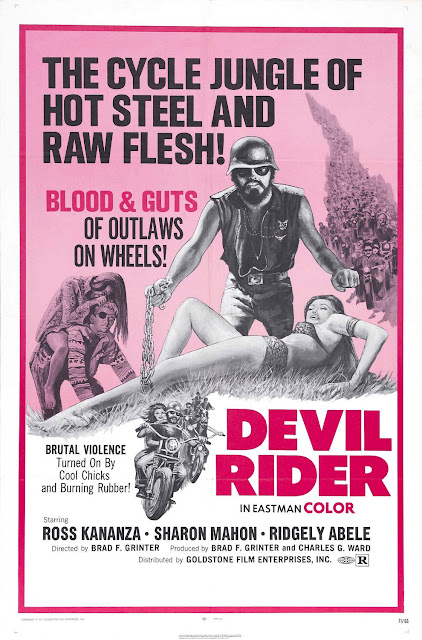 In the hierarchy of infamy for directors of bad, low-budget schlock films, Ed Wood is surely at the pinnacle. But if it were a competition then Miami’s own writer/director, Brad F. Grinter would most certainly give  ol Ed a run for his money.

Before proceeding, I must confess that part of my attraction to these movies stem from a peculiar phenomena that’s similar to déjà vu. It happens when you are watching a film or TV show and it’s set in a location that you have personally been to. It takes you out of the movie for a moment and gives you a buzz of recognition, your mind saying “Hey! I’ve been there!”. Even if I don’t know the specific locale, simply the architecture and general landscape of scenes shot on South Florida locations provide me with a sweet sense of nostalgia. I have coined the term “Miamisploitation” for flicks which supply these thrills and I have quite a fetish for them.

1970’s “Devil Rider” (aka “Master’s Revenge”) is a biker movie that concerns the disappearance of a teenaged girl. Her parents hire a private investigator to find her and bring her home. Their anxiety is exacerbated by the fact that her older sister ran away at roughly the same age, never to return. The viewer knows that she had an argument with her older boyfriend, a karate instructor, and that she took off to the beach to pout, While there she meets a biker who offers her a chance to relax by way of a nice ride. Soon though, she is a virtual prisoner of he and his gang. The PI finds the girl’s sister who had fallen into becoming an alcoholic hooker in downtown Miami. She provides him with a clue that sends him to look for her with the cycle gang. Meanwhile the missing girl’s beau also catches wind of her involvement with the bikers, leading to a karate versus street fight finale.

Okay that synopsis doesn’t portend anything extraordinarily bad but it’s Grinter’s crap-stained gifts that elevate it into terribleness. Grinter writes the most cliché-ridden, faux-hip dialog you that you can ever imagine. Seriously it would make Jack Kirby blush with envy. The interior sets are uniformly piss-poor but their 70’s vintage appearance adds a cool nostalgic vibe that the filmmaker could never have envisioned. The acting (as such) falls into two schools; wooden or hammy. The “Miamisploitation” comes on strong with scenes filmed at Greynolds Park, an old hangout of mine and a fantastic cycle ride on Sunny Isles Boulevard with the distinctive orange roofs on the Castaways complex in the background. My biggest thrill though, occurred about 20 minutes in when I realized that I had caught this very movie at the Drive-In, back in the day! 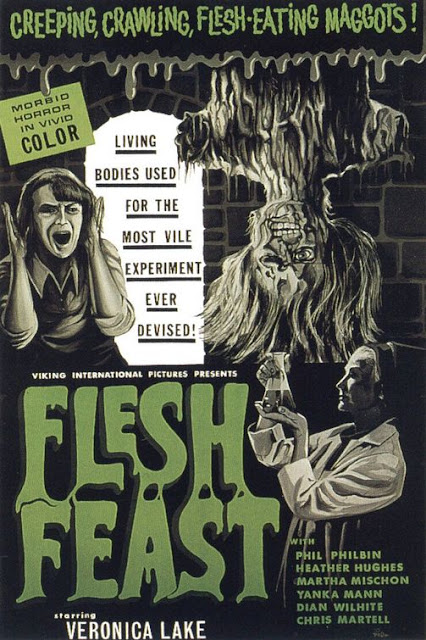 Okay I’ll flash a spoiler warning for you before discussing “Flesh Feast”. This is Grinter’s 1970 horror flick and is notable as one of the last films to star one-time sexpot Veronica Lake. Lake portrays a doctor who is conducting secret, illegal procedures at her mansion on Miami’s Star Island. She has learned of and developed a byproduct from specially bred insects who when devouring corpses produce an agent that restores youth and vitality. Although you might suspect it, her skills are not being supported by the elderly, youth obsessed rich of Miami Beach but instead by a clandestine group of right-wingers and South American strong men. They want her to use it on their aging, secret leader. Of course the leader is Adolph Hitler and after strapping him to the table, she infuses him with the bugs. The critters then begin to provide the devil with a horrible, agonizing demise while the doc reveals herself to be a Jew whose mother was exterminated in the camps.
The movie shows off a few more of Grinter’s special “talents”. One is a thoroughly lackluster scope of imagination in choosing his camera set ups. No thoughtful camera angles here, nope, just put the actors in frame and shoot. If your players have more than one scene on the same set, no need to revise the lenses POV, at least that seems to be his philosophy. Another gift is his use extraneous plot points and characters for the goal of exposition, There is a subplot about a reporter seeing one of the characters arrive at the airport and then later investigating the doctor, that doesn’t really serve much of a purpose at all. I will throw him a bone him in two areas. With Ms. Lake on board we had a least one decent actor in the cast. Plus the special effects of the bugs crawling inside Hitler’s face were pretty well done.

The “Miamisploitation” elements aren’t quite as resonant in “Flesh Feast” as in “Devil Rider”. There’s a nice shot on the expressway leading away from the airport that was very familiar to me, as I traveled this section of highway an awful lot. Weirder still was the bank of phone booths at Miami International. I had a job that put me in their vicinity on a nightly basis and it was kinda like seeing old friends. 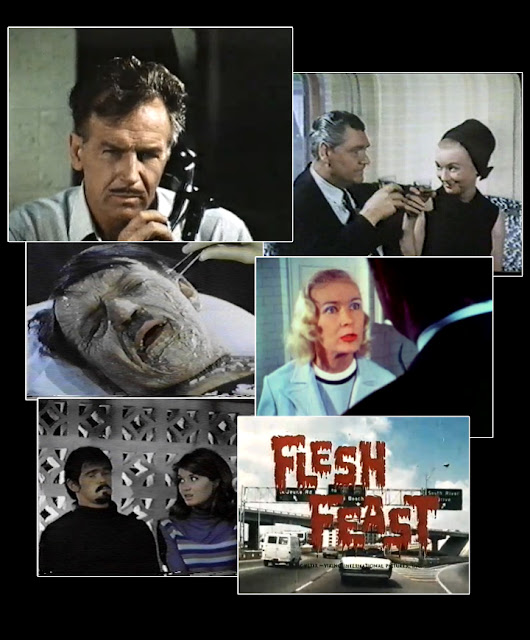